Remember the Fallen and Support the Living

Remember the Fallen and Support the Living

The red poppy is an internationally recognized symbol of wartime sacrifice worn to honor those who served and died for their country. It reminds Americans of the price paid by veterans to protect their nation’s freedoms.

This year, The American Legion brings National Poppy Day to the United States.

“By wearing poppies on National Poppy Day, you not only honor every service member who has died in the name of liberty, freedom and democracy, but through this simple red flower provide an opportunity to support veterans for generations to come,” said Charles E. Schmidt, national commander of The American Legion. “It is important for Americans to remember that there is an entirely new group of veterans, and supporting them and their families is absolutely essential.”

History of the Poppy
After World War I, the poppy flourished in Europe. Scientists attributed the flower’s growth to soils in France and Belgium becoming enriched with lime from the rubble left by the war. The red poppy came to symbolize the blood shed during battle following the publication of the wartime poem “In Flanders Fields,” written by Lt. Col. John McCrae, M.D., while serving on the front lines.

The tradition of wearing a poppy began in 1918 when Moina Michael read the poem and was so moved she bought a bouquet of poppies and handed them out to businessmen meeting in the New York YMCA. She asked them to wear the flower as a tribute to the fallen, a custom that continues to this day. 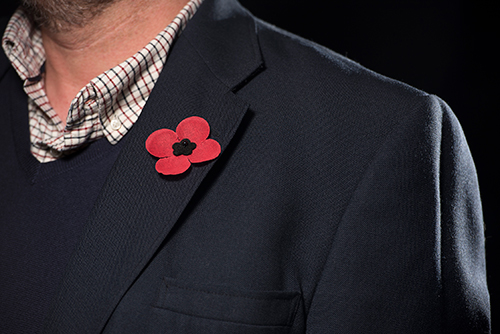 Each year, members of The American Legion, led by the American Legion Auxiliary, distribute poppies with a request that the person receiving the flower make a donation. All donations received on National Poppy Day will be used by The American Legion to support the future of veterans, active-duty military personnel and their families with medical and financial needs.

Get Involved
Join with The American Legion and wear a red poppy Friday, May 26, to remember fallen heroes, show your support for those serving on active duty and keep your promise to honor veterans for generations to come. Here are a few ways you can participate:

Share your Support
Bring awareness to friends and family by sharing #PoppyDay and #LegionFamily on social media. Let everyone know about the symbolism of the flower and what it means to wear it.