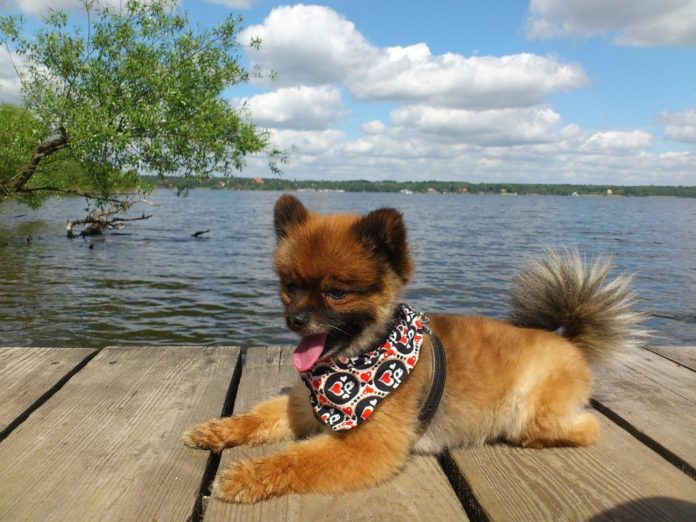 Anyone who has met a Pomeranian can tell you what they lack in size they make up for in personality.

One might ask “Why would such a little dog have so much energy, personality, and bravery?”

The answer is in the History! Believe it or not the Pomeranian was not always the cute tiny dog of today.

They are the smallest of the Spitz breed. The breed originated in what is now Poland and West Germany. Their larger ancestors were used as sled dogs and sheepdogs.

Queen Victoria was the true champion of this breed. She became obsessed with them on a trip to Italy and brought some home, became a serious breeder bringing them down to the common 4 to 7-pound size, and that as they say is history.

Now that we have talked a bit about where they came from what are they like now?

They are now a vivacious, loving companion dog. They love to play, have cuddles, and be independent as well.

Some qualities that can often be considered as a con of the breed is that they are very protective of “their” humans as well as anything they perceive as belonging to them.

They are generally wary of strangers as well. They may seemingly bark at nothing

As it is true with any breed of dog – if the pet owner allows the dog to exhibit poor behavior such as, nipping at strangers, and barking continuously this would not only be bad for your new Pomeranian. But it would surely create a great deal of strain for the family, as well. However, with the proper training, learned and taught behavior modifications, and ample socialization with other dogs and people; these basic personality traits can also make them great guard dogs.

Pomeranian’s are great with children, if the children are respectful of them, and their delicate size. Because of their small size and delicate bones, they are not a suitable pet for homes with small children such as toddlers. The children must be of an age to understand that this is a “real, live” dog and not a toy. Pom’s love their families and it truly shows.

One nice thing about Pomeranians is that they can be exercised in an apartment setting with the use of small dog toys This helps them to get much needed interaction with their “pet parents,” and that quality pet time can also be used as a training session. Thus, helping to reinforce desired behaviors.

Pomeranians do love having their “Doggy Walks.” So, be sure that when you do take your Pom out for a walk that they’ve had a good grooming and dog haircut. Also, it’s a wise idea to make sure your furry little one is wearing  appropriate dog clothes for the weather conditions.

One downfall for the Pomeranians as with all Toy breeds is, they do have many health problems that can add up to a rather large vet bill as they age. Tooth problems are common so be sure to start young with
good oral hygiene, use a good dog tooth brush and tooth paste . As much as they hate this it could be a life extender and help them live that full 15 years that they have the potential to live.

If you are thinking of getting a Pomeranian, I hope this article has helped somewhat in the decision-making process. Please consider dog adopting before buying a new puppy or dog. A Good resource for pet adopting is your local animal shelter. Another good resource is your local pet stores or large chain pet stores such as, PetSmart. There is generally a PetSmart in almost every large community. So, I encourage you to check them out – they frequently have adoption events. Another great resource is the Pomeranian Rescue – make sure to check them out at http://pomeranian.rescueme.org/

I know everyone wants a cute puppy,
but there are many wonderful older dogs

that need a forever home who would love you as much as a puppy – so please give the idea of adopting an older dog a try.

If Your Dog Pees in Her Sleep Wetting Her Bed? You Must Read

Top 3 Tips on How to Save Money on Pet Care

So, what’s the deal with beef and heart health?

Lamaze to Parents: Get the Most From Hospital Tours to Be Ready for Baby’s...

Secrets for a Well-Maintained Lawn

Welcome the Return of Warm Weather with Farm-to-Table Foods

Family Life Tips Magazine is your parenting tips, recipe ideas, pet, lawn, and garden website. We provide you with the latest how-to parenting tips and self-help videos straight from knowledgeable our editorial team.